According to: Reno Tahoe Blog

History surrounds you when you visit Virginia City. From the wooden sidewalks to buildings dating back to the 1800s, it’s no wonder there are tales of ghostly happenings at many of the town’s landmarks. Do you dare hunt for haunted experiences in Virginia City? If you do, here are a few places to start.

For a terrifying experience that may have you running for the door in the middle of the night, visit the Silver Queen Hotel & Wedding Chapel. With spirits caught on the Wedding Chapel’s security camera, and paranormal activity occurring in rooms 11 and 13, this 142-year-old property has been frightening guests for years. The ghosts of Rosie and Annie can be heard running around the hotel and tapping on windows. Take a chilling guided tour, available on Thursday, Friday and Saturday nights.

Built in 1875, the Fourth Ward was one of the biggest and nicest schools in the area. After years of neglect, the Ward was closed for more than 50 years. Repairs were made and it was reopened in 1986. Today the building is still open as a museum, but the spirit of former teacher Miss Suzzie can still be seen searching the grounds for her students. 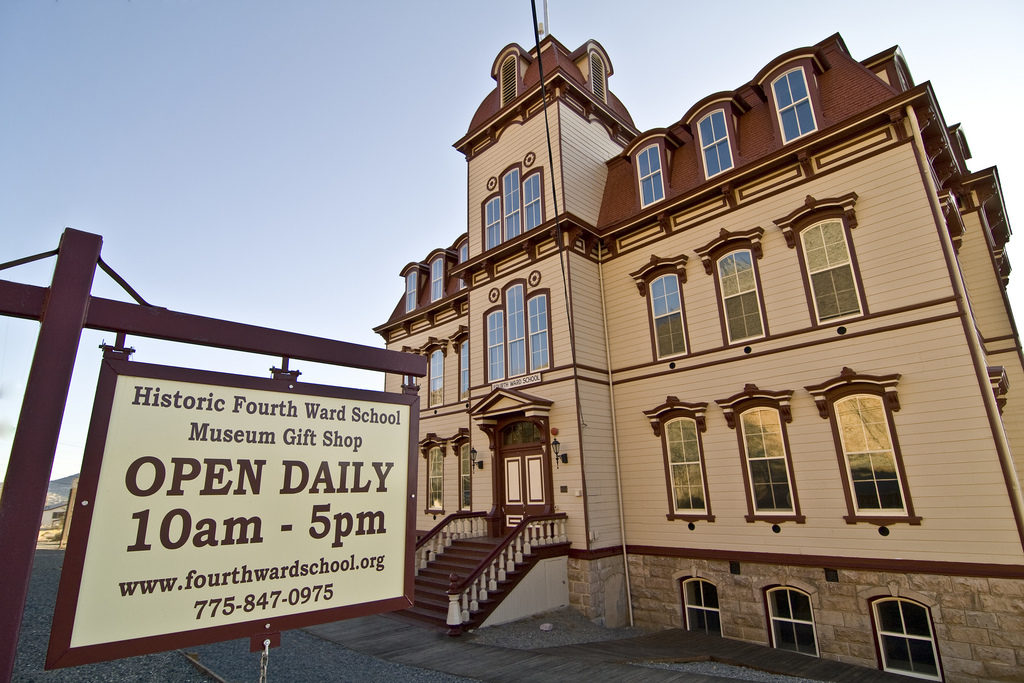 This quaint 1800’s motel is reaping with charm… and haunts. Each room comes with a “ghost log” where guests are encouraged to record any strange happenings. Step inside the “Doll Room” if you’re searching for unexplainable noises such as heavy breathing, footsteps, laughter and moving doors.

John Piper’s Opera House was burned down twice, leaving the third rendition of the building lasting. The Opera House brought talent and magic to Virginia City for many years. Today people can still see some entities performing, watching or setting up for a big show. Some of the most haunted areas of the Opera House are the balcony, attic and basement.

Comstock Millionaire John Mackay may have made a deal with the devil to save his famous Mackay Mansion. While the Great Fire burned nearby areas, the mansion was unharmed. Although the Mansion still remains intact, seven or more spirits have been seen inside or around this mysterious mansion. Mackay’s wife has been heard wandering through the halls, searching for her lost lover.

The legend of Peter Larkin’s hanging still haunts the Storey County Courthouse. After being accused of murder, Peter’s girlfriend’s testimony in the Courthouse resulted in Peter’s death. Today the Courthouse remains open as a museum to preserve the history of American law enforcement. But if you listen close enough, Peter’s cries for justice can still be heard.

Built in 1870 as a luxury bar called the “Millionaire’s Club,” the Old Washoe Club was known as an exclusive high-status meeting place for the men in Virginia City. With a brothel up the spiral staircase and a large freezer called “The Crypt,” it is no wonder strange happenings occurred here. For many years the death toll of this club was on a roll. An explosion killed 12 people in 1873, several suicides, missing prostitutes and bodies stored in the Crypt all could account for the sense of spirits in the Washoe Club. Today, you can take a tour of the building’s haunted history – guided tours are available throughout the week. 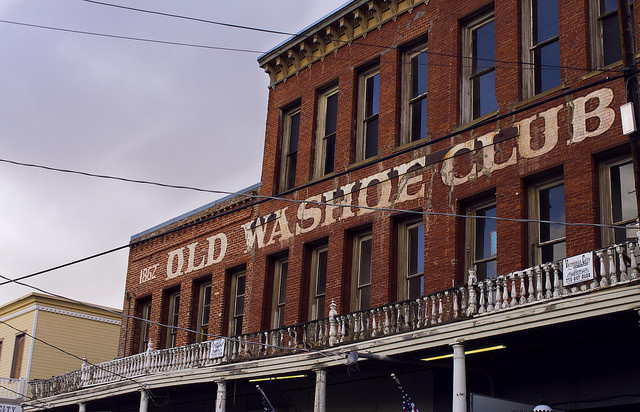 This empty area next to the Silver Queen has a nasty habit of burning down hotels. The first hotel was built in 1860 and burned three years later. Once rebuilt, the Virginia City “Great Fire” burned the second hotel, along with most of the town. Finally, the last version of the hotel was ruined in 1914. Since then this lot has remained vacant, providing an area to park your car and listen to the ghosts.

In a place where the deceased are supposed to be at peace, it is chilling to think that some of the dead are still wandering around. While ghostly activity can be common in cemeteries, the Silver Terrace Cemetery is a large collection of the final resting place for everyone who lived in the area since the 1860’s. Stretching over a hillside, this cemetery encapsulates an eerie Nevadan setting. 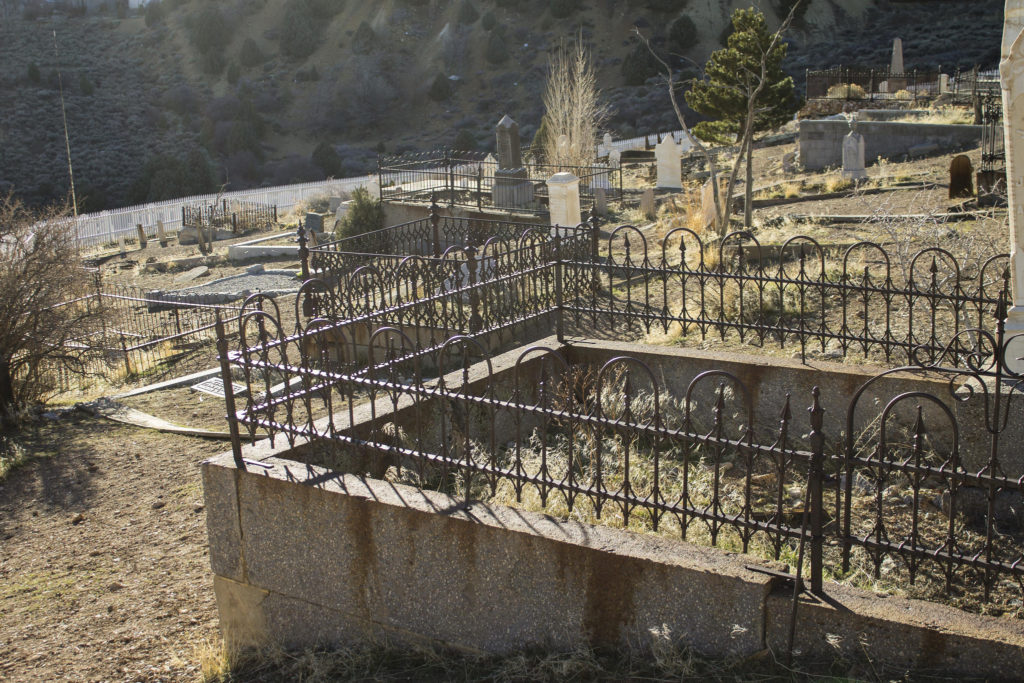 Once known as St. Mary Louise Hospital, six or seven sisters lived in the attic and cared for the sick people of Virginia City. The doors were open for anyone, no matter how sick. Complete with an operating room on the first floor, an insane asylum on the fourth floor, an emergency area in the basement, and a nursery for children, this old hospital has seen its own share of horrors and death over the years. One of St. Mary’s most famous patients is the ghostly man who can be seen sitting in his wheelchair with a confused gaze. The legendary “White Nun” is known for messing up visitors beds and walking the halls searching for patients.

This secret clubhouse is still a mystery to many Virginia City residents. The members of the Knights of Pythias were said to be a fraternity that honored the law of the land and in a way became their own type of law enforcement. While these Knights did help the community, no one is quite sure what occurred within the E. Clampus Vitus Building. It is rumored that numerous murders were committed by these fraternity members. Currently, the building is privately owned, keeping its hauntings an unknown mystery.

Mining accidents were terrible but frequent in Virginia City back in the 1800s. In 1869 a total of 37 miners were tragically killed with their bodies never being recovered. At the Gold Hill Hotel, it is said that the miner’s spirits still reside in several rooms and their favorite cabin in the back. Keep an eye out for William, the cigar smoking spirit who has been seen sitting on the bed in Room 5.

The curse of owning the Delta Saloon comes with a deadly price. Three previous owners lost more than their money when gambling on the Saloon’s famous Suicide Table. The original casualty “Black Jake” lost $70,000 one night, before taking his own life. After two more suicides, the table’s name was famous, and the decision to cease dealing on it was made. Today the table is still located in the Delta Saloon, where people can see the deadly table, but to prevent risky gambling it is protected under Plexiglass. 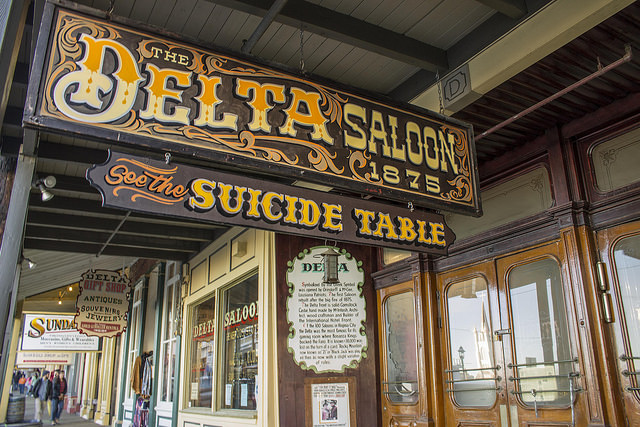