If you build a huge commercial center in the largest industrial park in the United States, will the services come?

A group of investors is betting that the answer is “yes,” as The Horse Oasis breaks ground this week for the first of several buildings at the Tahoe-Reno Industrial Center.

The $150 million project aims to fill a glaring need in the industrial park located just east of Reno-Sparks, said Batuhan Zadeh, head of land acquisition for real estate company Marmot Properties. Thanks to the arrival of companies such as Walmart, Tesla, Panasonic and Switch, the Tahoe-Reno Industrial Center is now home to thousands of workers. The number of businesses that cater to those workers within the park, however, is extremely lacking, Zadeh said.

“The goal is to bring new services to USA Parkway,” Zadeh said. “Right now, there are very few options compared to the number of people out there.”

Restaurant options, for example, are limited to just a few dining spots such as Burger King, Philly’s NV and Shanghai Express. There’s also a drought of other services that cater to the park’s workforce, including retail stores and health clinics. It’s a sweet spot that The Horse Oasis hopes to take advantage of, especially given how only 12% of the land at the park is zoned for commercial use.

The Horse Oasis can have “an urgent care (facility), a charter school, a gym, doctor’s office — anything that’s not residential or industrial,” Zadeh said. “The project is really bringing in the feasibility of providing space for companies.”

Another chance for opportunity zone investors

The first three buildings are slated for completion this year, followed by three more by the end of 2021. Once the project is completed, there will be 16 buildings on the 871,200-square-foot site.

There is no timeline for when all of the buildings will be completed. Zadeh pointed to the challenging construction market as a key factor, with strong competition causing a shortage of available workers.

“I wish we could do all the buildings at the same time but the labor is not here,” Zadeh said. “It takes about six to seven months per building (to finish).” 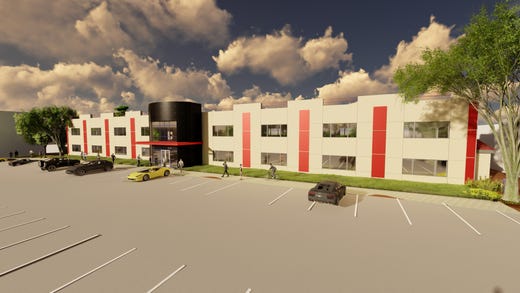 The Horse Oasis is also the latest opportunity zone project to hit the area with backing from outside investors. Opportunity zones fueled a flurry of activity before the end of the year as developers tried to meet an end-of-year deadline to qualify for higher tax breaks. The opportunity zone program rewards developers with significant tax incentives for building in economically depressed areas.

Opportunity zone projects, however, have also come with their share of controversy. These include the Tahoe-Reno Industrial Center, where The Horse Oasis is being built. The industrial park made national news after critics questioned whether Storey County received special treatment after the location was chosen as an opportunity zone.

The site was also tied to allegations involving former 1980s “junk bond king” Michael Milken, following a New York Times article that reported that he was invested in property at the industrial park. In a five-page statement sent to the RGJ in October, Milken denied any involvement in getting the site an opportunity zone designation. A representative of Milken also sent another statement on Tuesday that Milken “owns no such investment” in TRIC.

‘We’re not concerned about a downturn whatsoever’

Renderings of The Horse Oasis, a 16-building commercial office and retail project at the Tahoe-Reno Industrial Center. (Photo: Marmot Properties)

Funding for The Horse Oasis is coming from overseas via investment partners in Saudi Arabia.

Although the opportunity zone incentives were attractive, Zadeh insisted that they were not the driving force for the investment.

The Tahoe-Reno Industrial Center was already appealing to investors due to the presence of facilities such as Tesla’ Gigafactory and Switch’s Citadel Campus. Then Google came in as well. Given the names entering the park, the investors decided to buy 20 acres right away, according to Zadeh.

“It was about USA Parkway,” Zadeh said. “The rest is just gravy.”

Get the latest business and technology news. Become a Reno Gazette Journal subscriber and get unlimited digital access to stories like this that matter. Support our work by subscribing today.

Also, while funding is coming from overseas, the driving force behind the project involves local people. One of the brains behind The Horse Oasis is Fady Mehanna, who owns 1up, Brauhaus 701 and the Whisky Lounge.

With ongoing murmurs about a potential recession after the U.S. economy posted a record 10 straight years of growth in 2019, Zadeh responded that people behind the project are “not concerned about a downturn whatsoever.”

“We’re very methodical in the projects that we take,” Zadeh said.

This includes The Horse Oasis, which is definitely a long-term play.

At the moment, there is a large untapped market in USA Parkway, with some projecting the number of workers in the area to grow to 30,000 in the next few years, Zadeh said.